The 11th edition of the Jammin’ Java Mid-Atlantic Band Battle held its preliminary competitions last week, and I was judge on Tuesday and Wednesday nights. Host Nate Ihara repeatedly touted that I’d be posting photos here, but I wound up writing up each night as stories for examiner.com instead.

And so, if you’ve come here to CPF looking for MABB coverage, please use the following links: 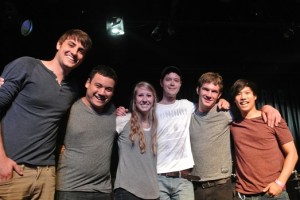 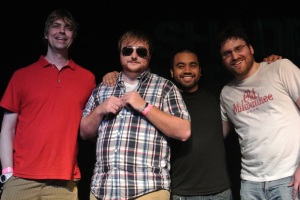 On Tuesday night, I sat at the judges’ table during the second of four nights in the preliminary rounds of Jammin Java’s Mid-Atlantic Band Battle #10 (yes, #10!). Six bands performed, but only one advances to the finals, the winner of which will get a range of prizes like studio time, a professional photo shoot, a Jammin Java headline show and even an official press bio written by a published music journalist (me?!)

As usual, it was a great chance to catch up with some fine local bands and this particular night had two recurring themes – youth and hard rock. The first band on was Whyte Crimson, a four-piece instrumental band that brought some heavy riffage to the club. (BTW, I must apologize in advance for the quality of the photos. I was using a basic camera, not my SLR, and shot mostly from a distance, while sitting at the judges’ table.) Here’s the Reston-based Whyte Crimson, complete with congas! 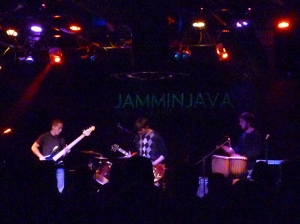 Next up was Bachs of Rock, a group that made an impression for bringing a big sound despite the fact that all the members are under 16. Their set included covers of the Beatles and Metallica. 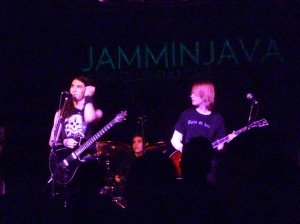 Third band up was Good Morning Tides, who had a howling lead singer, a wild guitarist and a sense of dynamics, moving from quick tempo to slow… 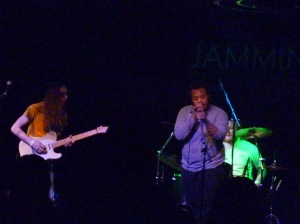 As the night moved into its second half, another young band took the stage – Coda – whose band members are also teens. One of the judges mentioned that he saw the band open for a Tool cover band at Fillmore Silver Spring and was impressed. So was I when they began playing. Even though I’m not, by nature, a frequent hard rock  listener, I can appreciate a lead singer who knows how to sing/scream with control and good pitch, and this kid had it. 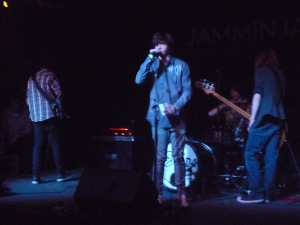 The Maryland-based band has studied its Led Zeppelin songbook well, playing with equal parts power and hooks, especially on a song that I’m guessing could be called “Messenger/Prophesy.” At its end, I turned to the hard rocking judges next to me and asked if it was an obscure metal classic I didn’t know, but was told it was an original. Points! (I’m writing this while watching “@Midnight.”)

Our evening’s host, Nate Ihara, shared a photo of Coda that he took from his vantage point closer to the stage and it’s a great action shot… 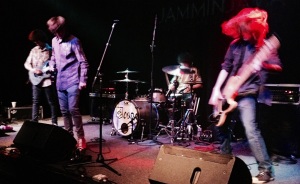 Things heated up with the arrival of the penultimate (I love that word) band, Skyward, a five piece with U2-like ringing guitars and catchy, anthemic choruses. They also had a great moment when everyone played various drums/percussion for a mighty noise. (This is another photo from Nate.) 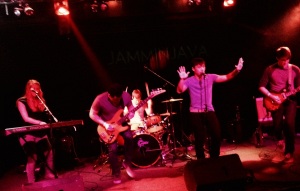 And last but not (as the saying goes) least, came another quintet, Playground Etiquette, from Baltimore. This group also had a fierce singer (this one female) who played guitar as well, and offered  the unique accents of violin. (I grabbed this shot on the way back from the ladies room, so there’s a little better focus and perspective.) 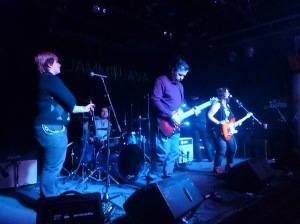 I’d like to think there are no losers in these Band Battles, as all the musicians who make it to the preliminaries, after scores of acts submitted music for consideration, have shown themselves worthy of a hearing. As for the judging, with points given for musicianship, look, crowd response and other factors, it sometimes comes down to very tight margins. On this night, the winner was…Coda!

The guys will go on to play against the three other preliminary night champs on February 28.

I’m judging again tonight (Thursday, January 9) and have to hit the road shortly, so better wrap it up.  Thanks for reading and support local music!