There was a time when being a music journalist (“critic” is too harsh) meant trying to turn people on to new music by explaining and describing it in a way that would convince readers to seek it out. And in Ye Olden Days, that usually meant tracking sound down and buying it on some kind of physical media.  Now that there’s a firehose of free content coming at us 24/7 from all sides, I feel my “job” (even when there’s no paycheck?) is to talk about stuff I enjoy and point people to links they can use to hear for themselves.

The “Recommended If You Like…” or FFO (“For Fans Of…”) tag is easy shorthand to help introduce a new band. In the case of Ohio’s indie-rock/folk/psych musical collective Saintseneca, led by songwriter/songwriter and multi-instrumentalist Zac Little, I could refer to the likes of The Decemberists, maybe a little Mumfordism, even a touch of early Led Zep “bustle in your hedgerow” fairytale-telling, but it’s hard to pin the band down. American Songwriter once wrote, “It’s as if Conor Oberst was fronting Arcade Fire” and that’s a good one.

When it comes to acts that aren’t radio favorites, I’m always fascinated to hear how people first heard/heard of them. My Saintseneca origin story dates to April, 2015 when my Dr. Daughter, the unicorn (so dubbed for getting a real world paying job that directly relates to her Liberal Arts PhD), and I went to DC’s legendary 9:30 Club, to see her former high-schoolmate, Thao Nguyen and the Get Down Stay Down. Saintseneca was one of two opening acts and we were mightily impressed by the band’s engaging music and stage presence. We bought some vinyl that night and have followed the Little & Co. ever since.

After three EPs and three full albums – Last (2011), Dark Arc (2014) and Such Things (2015), Saintseneca’s released its fourth full-length album, Pillar of Na, last fall. At the time, I wrote about Little’s fun unboxing video that exposes new dangers in the simple act of opening a carton of albums. Dr. Daughter and I saw the band at the Black Cat Backstage (alas, that cozy venue is now closed) in September and had a great time. Here’s a few pics from that set.

Because Saintseneca utilizes a wide range of instruments – violin, mandolin, dulcimer, Turkish Baglama, floor percussion – along with synthesizers and electric guitars, the sound is both rustic and contemporary. Many of the players, including Little, originally hail from rural Appalachia, which feeds the organic quality of their music, while the band’s beginnings, playing with punk bands at DIY house shows, instilled an ability to move from intricate acoustic picking to wild electric jams. For a taste of the band’s live chops,  this one-take live version of Pillar of Na’s title track, recorded at Ohio’s Musicol Studios, shows ‘em off.

Saintseneca took to the road again last month, opening a new tour here in DC, at Comet Ping Pong, and DD and I were there again. Here are some pics:

The band has just released a new one-off song, “In A Van,” and yes, it was inspired by Chris Farley’s motivational speaker character Matt Foley, after Little spent some time revisiting the comic’s Best Of videos. As the singer tells, it, “This collection was a fixture of goofy-ness growing up, but it felt like a revelation that night.

“It was a strangely emotional experience. The gauzy 90’s TV sheen, the feathery haircuts, a couple cringe-y jokes that didn’t age well. But, I saw his talent and craft shine through, in a way I had never quite noticed before. It was amazing, funny, and a little sad – knowing the end while witnessing the best all at once.

“What a weird nostalgia trip to fall into some 25 years later- all tangled up with life and memory- the same old thing, accumulating new meaning with time.”

After covering the east coast in September, Saintsenca is heading for the middle of the country and the West Coast this month. Here are the dates and ticket info.

February is the shortest month and yet it can easily feel like the longest, with the early-setting sun and bitter cold standing between me and spring – and my birthday, on March 1st. (Start planning now!)

At least this February, I have the sweet face of Harry Styles looking over my shoulder as I type, as his 21st birthday (can I buy you a drink, handsome?!) on February 2 makes him my calendar boy of the month. 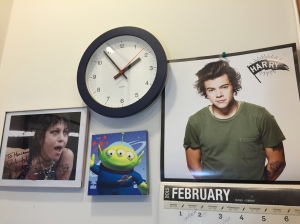 Yes, my possibly inappropriate 1D fangirl obsession continues, but I was able to make it work with a recent story posted on AXS.com, when respected indie troubadour Martin Sexton covered a 1D song for his daughter, after she found out that Harry was following him on Twitter.

Other recent stories for that site include:

Courtney Barnett’s new single/video and upcoming album. Very excited for this as I loved her album and the show I caught last year, at the Black Cat. She was also very gracious afterwards, meeting fans and signing albums. Here I am with the cool lady. 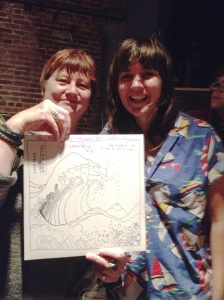 I’ve had a few other items posted recently, so here are some other links for your pleasure:

Jukebox the Ghost and Twin Forks giving away free music and touring together.

A review of The Black Cadillacs, and Knox Hamilton (a new favorite band) at Jammin Java.

To recap, here are places you can find me and links to a whole lotta love:

Thanks for dropping by and please come back soon. It won’t all be listicles (a horrible trend in journalism, with an ugly word to match!).