Yes, it’s been a while. And while you might not think I owe you an explanation (or maybe you do; I have no idea who follows me!), I have a better one than usual. Which, in my best manner of procrastination, will come later.

For now, I just wanted to say hello, prove that I’m still alive and writing, and share the following graphic from the people hosting the Governor’s Ball festival. When I first glanced at it, I felt really old since I didn’t recognize any of the musicians playing.

Then I realized it was a list of food vendors for the event. 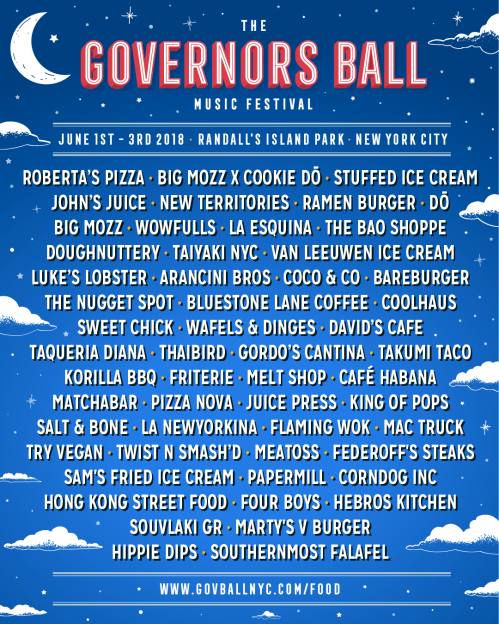 If you’re a regular follower of this blog (thanks!), you know I love taking concert photos.  If I can get a photo pass, I bring my good SLR camera and get up close in the pit. If not, I take along my “non-pro” point-and-shoot and, if all else fails, I’ve got my iPhone.

Yes, it’s important to Be At The Show and not just view life through a screen. I do that, too, but it adds to my enjoyment and is often part of my “job” (or is it a paying hobby?) to capture visual memories. It’s a recurring joy to look through my collection of photos and an ongoing challenge to improve my skills (alas, I am terrible at the technical end, but I think I have a good eye for composition).

I also love looking at other people’s concert photos, especially now that I realize just how hard it can be to get that one amazing moment, in sharp focus, with the colors right and no stray mic stands in the way.

Yesterday, a publicist sent me a gallery of shots from last weekend’s first inaugural Mempho festival, held at Shelby Farms Park in Memphis. I was blown away by the beautiful images. I pitched a story built around the gallery to an online editor, but was told that, since I wasn’t actually at the event, it wouldn’t be right for the site.

OK, then. But I can’t let these beautiful photos – of Cage the Elephant, Jason Isbell, Cold War Kids, Bishop Briggs, Robert Randolph, Southern Avenue – go to waste. You don’t have to like, or even know, the acts, to appreciate the shots. I picked my favorites from the nearly three dozen pics in the event gallery, and here they are – with photog credits, of course! – for your edutainment…

Despite best intentions for the new year (note I didn’t say resolutions; I know better), I haven’t posted much in January, but it’s for a different reason than my usual procrastination and sloth. I generally don’t use this blog as for a platform for political conversation, although I’m sure if you’ve read for a while, you’ve got an idea where my allegiances are. And my twitter feed, which pops up at the left side of this page, makes things pretty obvious.

I still think of this site as a place for music-oriented discussion and don’t want to get into the same kind of debates that roil my Facebook page. Trouble is, with the arrival of President Babyhands and his racist, misogynist, and/or frequently unqualified administration (There. No doubts left!) writing about music seems a rather trivial pursuit.

There’s so much to be done. As much as I love the Harry Potter novels, I never expected to be living in one. There is a cause at hand that commands a Dumbledore’s Army-style of commitment. I marched in the 60s and, as an Internet meme of an older woman declares, “I can’t believe I still have to fight for this shit.” 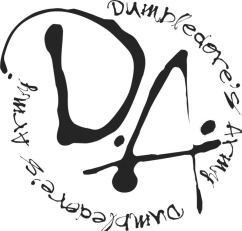 Thankfully, social media has given me an outlet that allows for participation – and I don’t mean signing endless online petitions. There are notifications of calls and donations to make, information to share, encouragement to offer those who are in a better position at the front lines.

But rebellion requires fuel, too. Some say an army marches on its stomach. But let’s not forget the fife-and-drum corps, the marching bands and infantry cadences. Music is the food of life, and of the soul, and the music I love – old favorites and new discoveries – have kept me going since that dark night in November when I began to wonder if I was a stranger in my own country.

So, I will write about music here. And mostly music, though I may share a few of the best political cartoons and satire now and then. Again, feel free to remove this blog from your reading list if you think you’ll be annoyed or (especially) if you’re tempted to argue on the side of our modern Voldemort. I won’t post and I won’t reply. It’s MY blog, after all. There will be plenty of alternative music, but no alternative facts allowed.

And so, having said my piece (peace!), I’ll be back soon with a love letter to vinyl.

February is the shortest month and yet it can easily feel like the longest, with the early-setting sun and bitter cold standing between me and spring – and my birthday, on March 1st. (Start planning now!)

At least this February, I have the sweet face of Harry Styles looking over my shoulder as I type, as his 21st birthday (can I buy you a drink, handsome?!) on February 2 makes him my calendar boy of the month.

Yes, my possibly inappropriate 1D fangirl obsession continues, but I was able to make it work with a recent story posted on AXS.com, when respected indie troubadour Martin Sexton covered a 1D song for his daughter, after she found out that Harry was following him on Twitter.

Other recent stories for that site include:

Courtney Barnett’s new single/video and upcoming album. Very excited for this as I loved her album and the show I caught last year, at the Black Cat. She was also very gracious afterwards, meeting fans and signing albums. Here I am with the cool lady.

I’ve had a few other items posted recently, so here are some other links for your pleasure:

Jukebox the Ghost and Twin Forks giving away free music and touring together.

A review of The Black Cadillacs, and Knox Hamilton (a new favorite band) at Jammin Java.

To recap, here are places you can find me and links to a whole lotta love:

Thanks for dropping by and please come back soon. It won’t all be listicles (a horrible trend in journalism, with an ugly word to match!).

First day of the new year, sitting in a comfy chair with the new laptop (thanks, Santa!) and watching the House of Representatives try to undo the damage of the “fiscal cliff.” Didn’t Congress get the memo? It’s time to shape up, fly right and get stuff done, dangummit.

Anyhoo, starting 2013 with a new O/CD Tally, this one to be handled via twitter. So, if you’d like to track the accumulation of new music that I get each day of this new annum, follow me @OCDmusicTally. There are already five albums listed (it was a good day of promo emails and surfing), three of which are freebies you can grab for yourself so I hope you’ll check it out.

Tomorrow, it’s on to whatchagonnaplay.com, which is also going to get more attention as part of the CPF 2013 Resolution/Revolution.